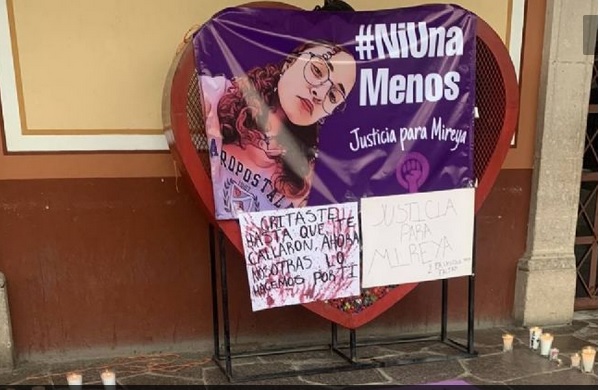 Members of feminist groups marched on Monday to demand justice for the femicide of Mireya Barbosa Hernández.

ZACATECAS, Zac. (August 17th, 2021) .- Great outrage on social networks caused the femicide of Mireya Barbosa Hernández, who initially was reported missing, and then her body was found in a vacant lot in the city of Guadalupe.

Relatives, friends, and citizens used the social network Facebook to demand clarification of the murder of the 20-year-old girl.

Members of feminist collectives marched this Monday to demand justice for Mireya, who was originally from the municipality of Sombrerete, from where she left a week ago for the city of Zacatecas, but they did not hear from her again, so her family and friends they launched a search campaign on social media.

On Sunday the 8th, state police located Mireya’s body wrapped in blankets, with signs of torture, in a vacant lot between the Villa de Guadalupe and Villas Mariana colonies, in the city of Guadalupe. For a week the body remained in the Zacatecano Institute of Forensic Sciences, until this Saturday, August 14th, when it was finally identified and claimed by her relatives.

“This march is to ask the authorities this question, what are they doing to protect us? And to make civil society aware that they are killing us,” said one of the women who participated in the demonstration called by the groups Presencia Radical, Madres Disobedientes, Aquelarre Zacatecas, and Natzin.

The demonstrators toured the Eje Metropolitano boulevard, entered the historic center, and ended the march with an act of protest in front of the government palace.

So far this year, six femicides have been recorded in Zacatecas, according to the State Bank of Data on Violence against Women, (BANEVIM), which is based on data registered by the State Attorney General’s Office.