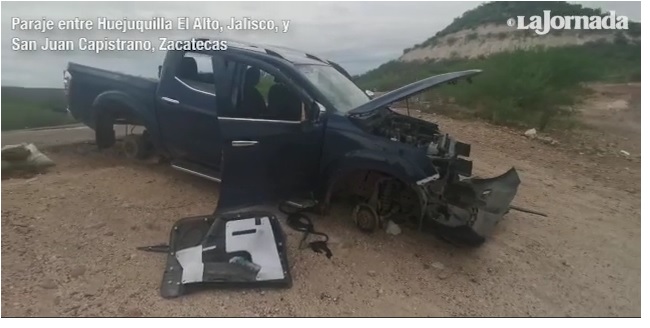 Zacatecas, Zac. On the morning of this Thursday, more than 30 armed civilians were found dead in a place located between Huejuquilla El Alto, Jalisco, and the community of San Juan Capistrano, municipality of Valparaíso, Zacatecas, government sources reported.

Elements of the Mexican Army found the bodies scattered in this region, which has been the scene of clashes in the last six months between members of the Sinaloa Cartel and the Jalisco Nueva Generación Cartel.

At the same time, during the morning of this Thursday, an ambulance from Huejuquilla El Alto arrived at a hospital in the city of Fresnillo to transport two gunshot wounded.

After leaving them at the hospital, the paramedics left in the ambulance but were later found dead in the community of La Florida, Valparaiso municipality, next to the ambulance.

The paramedics of the Jalisco Health Secretariat were assigned to the Huejuquilla el Alto hospital.

The Jalisco government reported that it knew about the events during the early hours of this Thursday after the ambulance left for Fresnillo on Wednesday night and its return was expected at 8:00 p.m., which did not happen.

“Hours later, Public Security personnel from the municipality of Valparaíso, Zacatecas, stated that at approximately 11:30 p.m., in the La Florida community, they found the unit belonging to the Jalisco Ministry of Health, abandoned and turned on,” he detailed in a release.

In the vicinity of the car, the lifeless bodies of the two victims were found, who had impacts from a firearm projectile in different parts of the body.

“The Government of Jalisco condemns these unfortunate events and subject to the corresponding investigation acts being carried out by the Zacatecas authorities, reiterates its willingness to collaborate to carry out the investigation in depth and achieve its clarification,” he concluded.