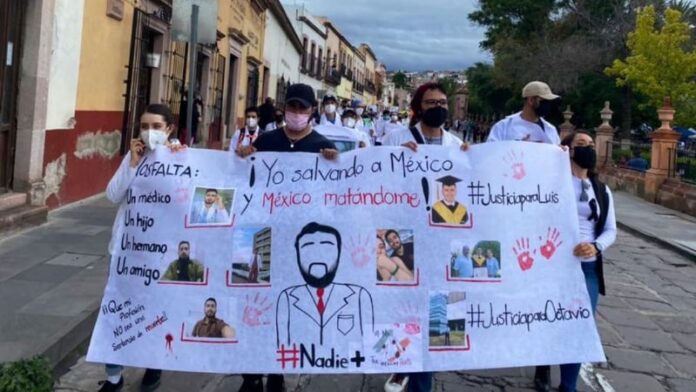 While hundreds of doctors marched in Zacatecas to demand justice for their murdered colleagues, in Fresnillo they dumped bodies in a water tank, and in Guadalupe, they killed a father and his son and shot a food stall.

ZACATECAS, MEXICO.- Hundreds of medical interns and nurses demonstrated in front of the Government Palace after marching through the main avenues of the capital to demand justice for their murdered colleagues.

The interns, nurses, undergraduate interns, and social service doctors demanded that the federal and state government guarantee safe conditions to provide their social service in health centers located in communities far from the state.

“Justice for Luis”, “we demand security conditions for social service” was read on the banners, alluding to the intern doctor, Luis Armando Montes de Oca, who was a month away from completing his social service when he was assassinated along with him. the driver of an ambulance on June 30 in the Serrano municipality of Valparaíso.

“Me saving Mexico and Mexico killing me,” the students and health workers shouted as they walked down Hidalgo Avenue until they reached the Plaza de Armas.

“If we save lives, let them save ours from murderous hands that determine how much it costs … life, life, murderous Zacatecas,” echoed in the historic center of the Zacatecas capital.

In front of the Government Palace, the protesters made a roll call of the murdered doctors in the state territory. “Dr. María Elena, present!” They responded in unison to remember the radiologist, María Elena Talamantes, murdered on July 8 by armed subjects when she did not stop her vehicle at a checkpoint on the Jerez-Valparaíso highway.

The demonstration also demanded justice for the medical oncologist and university professor, Héctor Luis Calzada, who was murdered in the state capital.

Medical interns read a public letter that the Montes de Oca Armas family addresses to President Andrés Manuel López Obrador and the governors of Jalisco, Enrique Alfaro, and of Zacatecas, Alejandro Tello, in which they demand justice and the murder of his son, the medical intern Luis Armando.

“Public disapproval and condemnation on their part is not enough, we demand justice,” the protesters said, criticizing that it is outrageous that health workers do not have security guarantees to carry out their work.

“Not one more doctor murdered,” they shouted at the protest in the capital, while in Fresnillo and Guadalupe the detonations of firearms sounded.