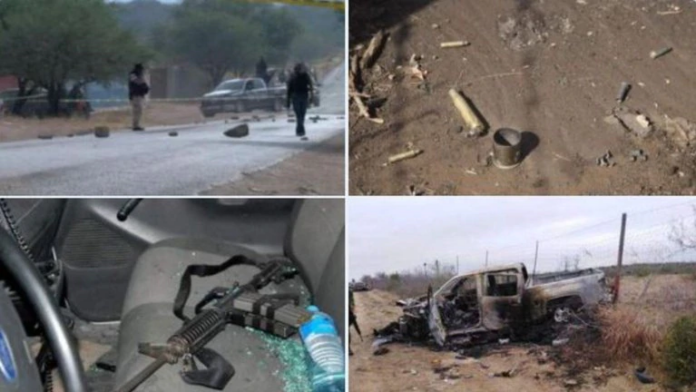 A confrontation between members of the Sinaloa Cartel and the Jalisco Nueva Generación Cartel (CJNG) left a tragic and bloody scene of 18 lifeless bodies in the town of Valparaíso, in Zacatecas, last Friday, June 25.

According to testimonies from community residents, this chapter of the drug war began at 11:00 pm on Thursday and ended at 5:00 am the following day; more than five uninterrupted hours of bullet exchange.

Although, for their part, some local media assure that the confrontation began on the afternoon of Wednesday, June 23, when the first detonations were heard.

In the midst of the dispute, residents report that they made a call to the authorities for help, however, due to the difficulty of access to the area, the security elements arrived until noon on Friday, when there was only the scene left. of crime.

According to the first reports, it was estimated that the violent encounter had left between 14 and 25 people dead. However, minutes later, it was confirmed that there were 18 bodies of the male sex found dead in the area: two charred, two partially charred and the remaining 14 with multiple gunshot wounds.

Similarly, three trucks were found, one suburban and two double-cab pick-ups, of which one was totally incinerated, in addition to five long gun magazines, a grenade, and casings of different calibers.

Unofficial versions indicate that the burned people were first killed by gunshot and later set on fire next to the vehicle located.

It was after the official expert reports that the authorities determined that the deaths derived from an antagonistic confrontation between the Sinaloa cartels and CJNG, this due to the fact that they were found wearing bulletproof vests with the acronym of the four-letter cartel, as well as tactical uniforms. and pixelated military style.

Expert elements began collecting evidence to carry out the corresponding investigations and carried out a deployment of police elements in the region to safeguard the well-being of its inhabitants.

Meanwhile, the bodies were transferred to the Directorate of Expert Services for processing and identity determination; Of these, only two have been officially identified: one from Nayarit and the other from Valparaíso, the town where the events took place.

This battle adds to the murders in Fresnillo, Zacatecas, the nodal point of the fight for territory between the two most powerful cartels in Mexico. As well as the June 12 ambush in the municipality of Mezquital, Durango

, adjacent to Zacatecas, where the Franciscan missionary Juan Antonio Orozco Alvarado died in the crossfire.

Zacatecas has experienced a violent escalation in the last months of 2020 and so far in 2021. Murders, beheaded, kidnappings and confrontations have become more recurrent. On the recent June 23 alone, 13 people were violently murdered in the state.