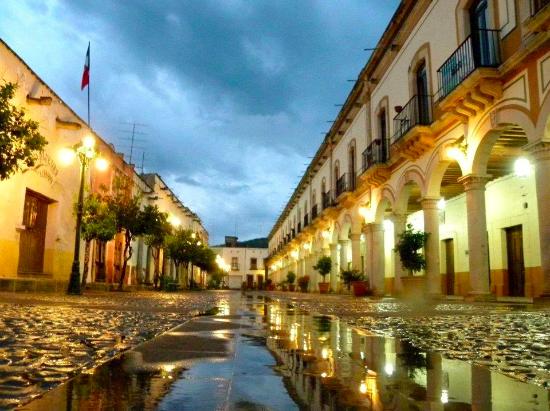 Guarded by quarry gargoyles, mansions, orange trees, and impeccable cobbled roads, Teúl de González Ortega welcomes you with a landscape in which the weather is friendly, worthy of a painting. Here the field is fertile for sowing the blue agave that culminates in the preparation of mezcal, a powerful drink that is not lacking during festivities.

It is worth visiting this Magical Town to the south of the state of Zacatecas for its 18th-century buildings; to get to know its mezcal factories and taste the exquisite agave creams.

It is said that Teúl was founded by the indigenous Teules, an offshoot of the Caxcan group who inhabited and dominated the region of the current state of Zacatecas.

However, like all unknown (or little studied) people, it is commonly associated with the Chichimecas who covered much of the north of the country during the post-classic period (1200-1521) during pre-Hispanic times.

Buy mezcal Blanco, reposado, or añejo, and agave creams flavored with coconut, coffee, passion fruit, piña colada, almond, or pine nut at the Don Aurelio factory, where you will also learn about the whole process that transforms blue agave pineapples into this traditional drink.

You will also find wood in the workshop of Don Cruz Manuel Jacobo Doñate, a craftsman who works with this material to give life to pine or copal masks. They are used by dancers called “Los Morenos” on the day of the Holy Cross. This is in the Barrio del Rosario.

Acquire pottery from the artisan Antonio Larios. In his workshop, there are pots, pots, jugs, flower pots, and gourds made of natural clay and clay.

Try the dulce de leche, cajeta, tamarind, sweet potatoes, lollipops, and rice cake with piloncillo, as well as tannin, a combination of pumpkin with honey and milk. Also the Ponte Duro, a mixture of sweet or dark corn with brown sugar. You can find all of them in the Municipal Market.

The gastronomic region to which the municipality belongs is characterized by the diversity of ingredients, which are the product of the abundance that the land provides. The canyon region has the warmest and most humid climate in the State, which is why the flavors will present very marked differences with other regions.

It is traditional in the gastronomy of the municipality of Teúl de González Ortega: The pipián, the tasty Gorditas from the oven, the ranch cheese (so-called for its manufacturing technique), and the cottage cheese.