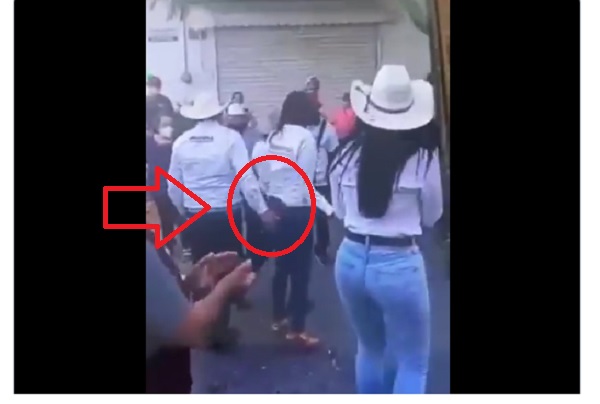 ZACATECAS, ZAC. (April 21, 2021).- During one of the rallies of political campaign events that are currently ongoing throughout the country, Morena’s candidate, David Monreal, a candidate for the governorship of Zacatecas, was caught on video “spanking” one of his female collaborators in the middle of the political event. The video has gone viral on social networks.

It is worth mentioning that David Monreal is the brother of the leader of the Mexican Senate, senator Ricardo Monreal, one of the most powerful members of the MORENA political party, and a very close collaborator of President Andres Manuel Lopez Obrador.

In the footage released on Facebook, David Monreal is clearly seen softly “spanking” Roció Moreno, who is the candidate for mayor of the Juchipila municipality. The video is all over the internet now.

Thus the butt grip that @DavidMonrealA gives the candidate of @PartidoMorenaMx to the government of Zacatecas to his partner Rocío Moreno Sánchez, candidate for the municipality of Juchipila. Stalker candidate?

The candidate David Monreal is seen, passed behind the woman’s back, when he touched her. All while they were in their campaign events they were surrounded by supporters of Morena.

So far, the Morena candidate, David Monreal, for the governorship of Zacatecas, until today he has not issued any statement.

“He has never disrespected me”

On the other hand, the candidate Rocío Moreno assured that David Monreal is a respectful person and has never disrespected her. Through a video posted on her social networks, the brunette accuses that the issue is being used to damage the integrity of her campaign and her partner.

“I am not going to allow them to use me,” said Moreno.

“Enough of the slander, enough of using the videos to damage our images. The Fourth Transformation is going to reach Juchipila, where the PRI and the PAN have abandoned it ”.

In the meantime, this video is highly harmful to the image of the MORENA political party, as they are increasingly known as misogynists, homophobic, and “Machistas“.