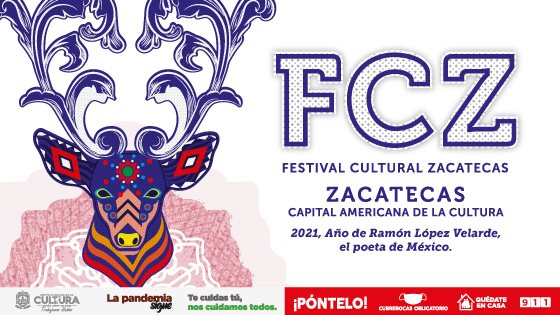 Due to the pandemic, massive events are still not allowed in Zacatecas, so all activities will be rather virtual. The good thing is that people can access this Cultural Festival from any place in the world.

The Zacatecas Cultural Festival (FCZ) is one of the most anticipated events, due to the quality of its shows and the number of visitors it attracts. However, since the beginning of the pandemic, it has had to adapt to the demands of the context , without this disturbing its essence. In this sense, Alfonso Vázquez, head of the Zacatecano Institute of Culture “Ramón López Velarde” (IZC), explains to us how the 2021 edition will be possible.

“This year, due to the pandemic, there will be no massive events and the FESTIVAL will be rather virtual, with activities that will be carried out through the social networks of the IZC, the FCZ and some video platforms, also through the Zacatecano Radio and Television System (Sizart) ”.

Traditionally the FCZ calendar occupied two weeks, but this time it will be lengthened. It will begin on March 25 – on the centenary of the birth of the Zacatecan painter Pedro Coronel – and will run throughout the month of April . Doing it in this way will optimize the use of the “virtual stage” and will encourage the reception of a wider audience.

As for the program , its publication will be made gradually, starting on  Friday, March 19 . It will not be done in a single time, because the confirmation of some groups is subject to the indications of the sanitary traffic light, which could modify the programming at the last minute.

How will this edition of the FCZ be possible?

Since health security is a priority issue, the authorities decided to base themselves on the same criteria of the face-to-face festival to transfer it to the virtual format . The quality will be comparable to that of past editions, “for that reason a process of selection of activities is carried out” , both of local talents, and of the groups that are invited by the IZC.

Likewise, the groups that were hired in 2020 and are pending to specify their participation will be taken into account. Another aspect that was considered was the economic one, as mentioned by Vázquez:

“We have a budget ceiling that we cannot exceed and adaptation to the virtual format requires securing copyright, investment in the use of equipment that guarantees us quality audio for video transmission while, on the other hand, there is a decrease in travel, transfer and other expenses ” .

What events are expected?

The head of the IZC explains that the traditional scheme will be followed , where there will be room for:

Regarding the latter, Vázquez explains that “we must remember that the processions of Zacatecas are considered as Intangible Heritage , which forces the Government instances -Tourism and Culture- to disseminate them for the purpose of preserving the symbolism and content of what is done. in the streets by tradition ” .

This year’s FCZ will be historic, not only because of the reality that frames it but also because it will be held under the appointment of Zacatecas American Capital of Culture 2021 and in commemoration of the launch of the Lopez-born poem “La Suave Patria”. This motivated us to take the life and work of the author as the thematic axis.

So you just have to wait for the launch of the program, get a good internet connection and enjoy the new edition of the Zacatecas Cultural Festival.