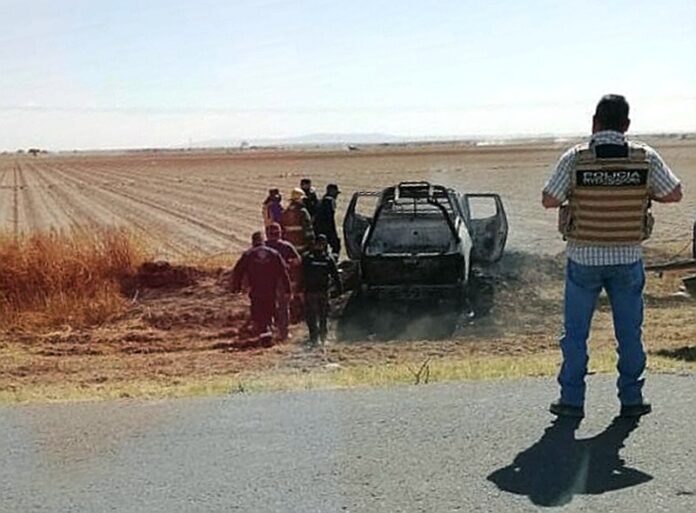 Four state police officers were shot to death and their bodies cremated, after confronting this Thursday, March 11th, with alleged members of organized crime -who were traveling in a convoy of several vehicles-, in the community of Chupaderos, municipality of Villa de Cos, Zacatecas, 50 kilometers from the state capital.

After the attack, more than 200 state police officers and members of the National Guard and the Mexican Army, together with the support of two helicopters, deployed a search operation that led to two more clashes, one in the community of El Tepozán, and then another, in the town of El Barril, municipality of Villa de Ramos, in San Luis Potosí.

After the armed clash with the alleged criminals in El Tepozán, two hitmen were killed, and six more were disarmed and detained, by members of the police corporations.

Given the lack of municipal agents in 40 of the 58 municipalities in the state of Zacatecas, members of the State Preventive Police (PEP) have been assigned by the Secretary of Public Security of Zacatecas (SSPZ), to carry out security and surveillance tasks in those demarcations.

The four commissioned state policemen were traveling aboard a municipal patrol in the Chupaderos community when they were attacked.

Around 2:00 p.m., when state agents Carlos Emilio De la Cruz López; Julio César Esparza Amaya; Alexander Ceballos Soriano and Juan Francisco Quintero Muruato, were circulating through the aforementioned town, when they encountered the group of armed men, the confrontation taking place but, overtaken by the aggressors, the officers were killed.

The criminals stripped the police of their long weapons, and set fire to the patrol, inside which were the corpses of the police officers were burned too.

With the support of two helicopters, one from the National Guard and the other from the SSPZ, the displacement of the armed convoy was located in the town of El Tepozán, municipality of Panuco, Zacatecas, whereupon arrival of the police and military, they located two vans, one pick-up and the other closed, which had multiple gunshot wounds and traces of blood.

There, two safe houses were located, where six of the alleged criminals and two more civilians were detained, who were already dead, as a result of the injuries they suffered in the confrontations with the state police. 6 long weapons and 3 short weapons were seized, as well as two fragmentation grenades, and the 4 long cargo weapons were recovered from the killed police officers.

Other members of the criminal group -not identified by the authorities-, fled to the community of El Barril, already in Potosí territory, where they were intercepted by other policemen and soldiers, with whom there was also a scuffle, and it was not known whether there were detainees or deaths.

This is the fourth armed confrontation in a week, between public security corporations, state and federal, against alleged members of drug cartels.