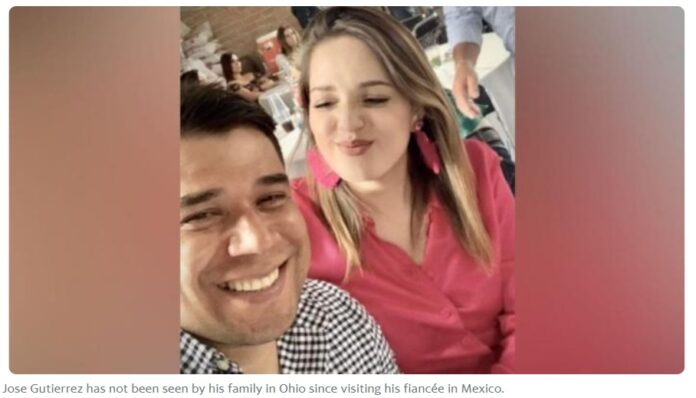 The bodies of a missing Butler County man’s fiancee and two members of her family have been identified, according to officials at the Houston consulate to Mexico.

A fourth body found in the area — a man’s — has not been positively identified yet, according to the Zacatecas State Prosecutor’s Office, according to Reforma.

José Gutiérrez, 36, flew to Mexico from Cincinnati on Dec. 22 to visit his fiancée, Daniela Pichardo.

The couple, Pichardo’s sister Viviana Pichardo and cousin Paola Vargas went to a bar in the north-central state of Zacatecas on Christmas Day. They left to go back to Pichardo’s home but never arrived, according to WCPO.

News outlets in Mexico reported that the vehicle Gutiérrez and others were last seen driving was located. Pictures show a flat tire, bullet holes, and deployed airbags.

When Gutiérrez’s future mother-in-law had not heard from the four into the night of Dec. 25, she became worried and contacted them — and in turn, received a text message with an address, she said.

However, when the family drove to that address, they were stopped by police and told the area they were in was too dangerous. The family was told to return the next day but was not given specific reasons as to why the area was dangerous.

The U.S. Department of State has issued a travel advisory for the Mexican state of Zacatecas, urging people not to travel in the state “due to crime and kidnapping.”

“Violent crime, extortion, and gang activity are widespread in Zacatecas state,” reads the agency’s website. “U.S. citizens and LPRs have been victims of kidnapping.”

Gutiérrez received his master’s degree in architecture from Miami University and has been working at Champlin Architecture in downtown Cincinnati.