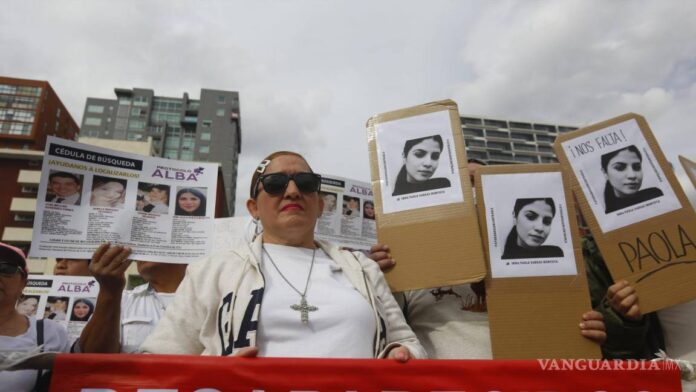 Relatives of four young adults who were reported missing on Christmas Day near the border of the Mexican states of Zacatecas and Jalisco demonstrated Monday in Guadalajara to demand that the authorities take action to find them.

From the Glorieta de las y Los Desaparecidos monument in the capital of Jalisco state, Daniel Márquez, father of Daniela Márquez, asked the governments of both states, especially that of Zacatecas, to carry out field investigations to find the disappeared.

“In Zacatecas, we see things very cold. I don’t know what is happening. We have not received any response, nor has anyone spoken to us on the phone – nothing,” Márquez told reporters.

Daniela Márquez Pichardo, 31, her fiancé José Melesio Gutiérrez Farias, 36, her sister Viviana Márquez Pichardo, 26, and her cousin Irma Paola Vargas Montoya, 27, were reported missing on Dec. 25 in the town of Víboras, Zacatecas, near the Jalisco border.

Melesio Gutiérrez, a United States citizen residing in the state of Ohio, had traveled on Dec. 23 to the city of Colotlán, in northern Jalisco, to spend the Christmas holidays with the family of his fiancée, Daniela Márquez.

The couple, her sister, and one of her cousins went for a walk to the town of Jerez, Zacatecas on Dec. 25, and upon their return, they communicated with their relatives for the last time while they were driving along federal highway 23 in the municipality of Tepetongo.

Later, her mother received a message showing a location via GPS at a point near Víboras, a few kilometers from the border and off the federal highway, but none of them answered her messages again.

“We feel that when they were kidnapped or the criminals detained them. What she did was send the location for safety reasons and that we knew where they were at that moment,” said Márquez.

The father of two of the victims said that they went to the town of Víboras where they verified that the truck in which the young people were traveling was abandoned in a deserted area.

In addition, he announced that the family of José Gutiérrez notified the Federal Bureau of Investigation (FBI) and other US agencies to collaborate with the investigation.

The area between Jerez and Colotlán was the scene of shootouts between organized crime groups during the final days of 2022, and there have also been reports of other missing persons there.

According to the interior ministry’s National Registry of Missing and Unlocated Persons, there are 109,558 missing persons in the country. Jalisco has the highest number of cases with 15,040 as of Jan. 2, followed by Tamaulipas with 12,467 and Mexico state with 11,867 cases. Zacatecas has 3,309 cases.