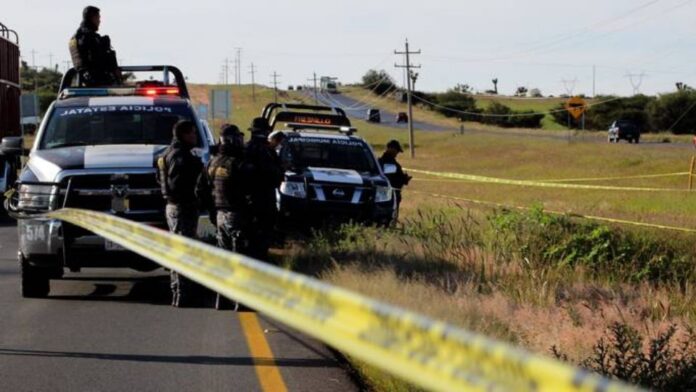 The federal security cabinet moved to the state in order to implement the security plan, with which the military presence will be reinforced.

Zacatecas.- The police of 9 municipalities in the state of Zacatecas resigned from the corporations in the midst of the security crisis that is being experienced in the state due to the fight for the territory that the Jalisco Nueva Generación Cartel and the Sinaloa Cartel have, according to the data of the Ministry of Public Security.

Apulco, Loreto, Monte Escobedo, Cuauhtémoc, Mazapil, Tepetongo, Villa García, Villa Hidalgo and Melchor Ocampo, were left without a police force due to the fear of the troops of being victims of organized crime .

This occurs in the middle of the scenario in which it has become common for semi-naked bodies to be “hung” from vehicular bridges; In recent days, 17 bodies have been found suspended on ropes in different parts of the cities.

In order to provide support to citizens and to be able to recover peace, as of this November 25, the security strategy will be reinforced, this was announced by the Secretary of National Defense, Luis Crescencio Sandoval .

In the same way, militia posts will be established in the communication routes of Zacatecas with other states , such as Durango, Aguascalientes, Jalisco and Nayarit, with the aim of increasing vigilance in the entry and exit of people on the highways.

These agreements were made within the framework of the security plan launched by the President of the Republic, Andrés Manuel López Obrador, and the federal cabinet.

During his visit, the president assured that the population is not alone and that all the necessary support will be given to the governor, David Monreal Ávila.

“With everything that is needed it is going to support; Zacatecans are not alone, they have the support of the federal government and, the same can be said regarding the support of the governor of Zacatecas, David Monreal Ávila, all of our support ”, he said.

The Government of Mexico deploys more than 3,800 troops before the wave of violence in the state of Zacatecas

The Government of Mexico has announced the deployment of more than 3,800 Army and National Guard personnel, as well as helicopters, within the framework of a plan to curb the wave of violence in the state of Zacatecas, where in recent weeks dozens of bodies they have been found assassinated, hanging from trees and bridges.

The Executive of Andrés Manuel López Obrador has presented this Wednesday the Zacatecas Support Plan, which will involve the sending of 210 soldiers who will join more than 1,740 who are already in place, while 250 members of the National Guard will move to the been to join more than 1,600 of his colleagues, Defense Minister Luis Cresencio has detailed.

To the more than 3,800 federal troops, there is also the dispatch of three helicopter gunships to the area, all with the purpose of alleviating the growing insecurity, which has led to a 128 percent increase in homicides in the last three years. . In addition, the strategy is to divide the state into three parts, north, center and south.

Mexican intelligence indicates that the wave of violence is due to the fact that Zacatecas connects nine states of the country, which places it as an “ideal center” for the operations of criminal organizations that traffic in drugs and other illicit goods.

Cresencio has advanced that this support plan, which has already started, will be evaluated in 30 days, after which the deployment will be reconsidered and new actions will be determined, reports the Mexican media ‘Milenio’.

The Defense Minister has detailed the strategy in a press conference at the Zacatecas Convention Center, where a security device has been implemented due to the visit of the national authorities.

López Obrador has been present in it, in which he has ratified the support of his Government in the face of the situation, which, in his opinion, must be faced “by doing good”, addressing the causes of the problem.

For his part, the governor of Zacatecas thanked the president for his visit, which has given “hope” in the face of the wave of violence in the state. “It is a complex moment, difficult for our state, they got out of hand. Today I have said it, we are facing a social emergency,” he warned about it, reports ‘El Universal’.

The government visit took place hours after the discovery of another eight bodies hanging, this time from a bridge and trees in the municipality of Fresnillo, one of the most affected by violence in Mexico.

Its mayor, Saúl Monreal Ávila, has denounced not having been invited to meet with the Mexican president during his stay in Zacatecas despite the latest events in Fresnillo, which has become a “death counter” due to the corpses he accumulates before the critical situation.