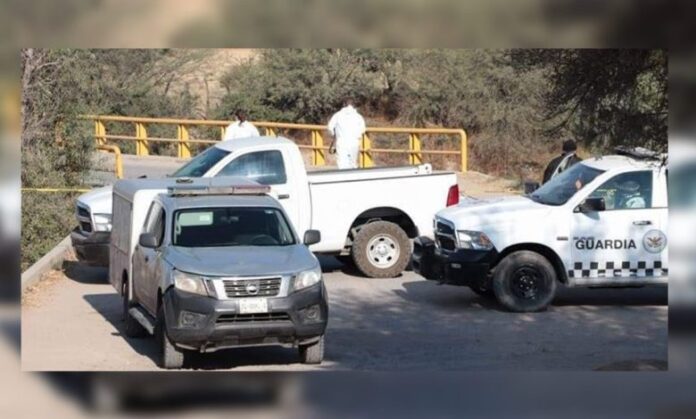 This Tuesday, November 23, just one day before President Andrés Manuel López Obrador (AMLO) goes to the federal entity of Zacatecas to present his Support Plan, authorities of Fresnillo – the municipality with the highest perception of insecurity in the entire country (94.3%), according to the National Institute of Statistics and Geography (INEGI) – they reported the discovery of eight bodies in three different points of the region.

The first event, confirmed by the Secretary of Public Security of Zacatecas, was registered in a vehicular bridge in the community of San José de Lourdes. There, the semi-naked corpses of three people were found, suspended from a rope.

“At this time we are working to recover the bodies and evidence to transfer them to the Forensic Medical Service for analysis, as well as the practice of the law autopsy and carry out the proper procedures for the prompt identification of the victims,” ​​reported the SSP in a statement.

The deployment of the authorities extended to other two points of the municipality, as three other bodies were located in the same community, although in a different place, hanging from a tree, and two more were found on a property between the San Ignacio and San Ignacio communities. Gabriel.

” Unfortunately, two more bodies were located on a property between the community of San Ignacio and San Gabriel, so at this time the operational actions and ministerial proceedings continue, for the procedure of the places and collection of evidence that make up the investigation folder that continues for these cases, ”reported the spokesperson for the Ministry of Public Security.

These events are added to those of the morning of Thursday, November 18, when a group of workers who had left their homes very early in the municipality of Cuauhtémoc, Zacatecas, stopped to look and take photos of the tragic scene that several of them ran into the bridge of the Orito before dawn.

“ It looked like something out of a movie. It was not possible that it was happening in reality ”, declared one of the witnesses.

Nine bodies, some of them half-naked, hung from blue and yellow ropes on the bridge of federal highway 4 5, in the municipality bordering the state of Aguascalientes. Some were tied by the feet. They were all swayed by the wind. A tenth body had given up under its own weight and lay sprawled on the asphalt. All were “male ranging from 21 to 42 years old, ” according to the police report.

“These are male victims, whose bodies were transferred to the Forensic Medical Service for study,” the Government of Zacatecas reported in a statement. Five were from Ciudad Cuauhtémoc, three from the municipality of Zacatecas, one from Guadalupe and one from Ojocaliente.

Since mid-2020, in Zacatecas they have highlighted constant fights between the Sinaloa Cartel and the Jalisco Nueva Generación Cartel (CJNG). The battle for that state is crucial to access the southern border of the United States, the main market for the cartels.

A cell in charge of the Mayo Zambada, called Operativa MZ and/or Grupo Flechas, was deployed in the state to confront those led by Nemesio Oseguera Cervantes, el Mencho, who has been assisted by leaders such as Audias Flores Silva and / or Gabriel Raigosa Plascencia, the Gardener, as well as his so-called Elite Group.

This Sunday, November 21, it was announced that President López Obrador (AMLO) will go to Zacatecas to present his Support Plan, as he has done with other states governed by the National Regeneration Movement (Morena).PlayVideo: Government of Zacatecas

The state is currently experiencing a wave of violence, so that last Friday, November 19, the constitutional governor, David Monreal Ávila, expressed that he expected help from the federation to address the insecurity and collateral conflicts that it brings.

“I am awaiting the arrival of the president of the republic so that he may also come to the rescue, to participate, to support, to attend to the social problems that we are experiencing,” Monreal commented. “I listen with sadness to these  limited expressions from some neighboring governors who want to exonerate their responsibility .”

According to the agenda released by the communication office of the Presidency of the Republic, AMLO will be in Zacatecas on Wednesday 24 and Thursday 25, although that same day he will be in Aguascalientes in the afternoon; while on Friday 26 he will attend Oaxaca.

On Wednesday 24, he will present the Support Plan in the state capital, at 7:00 p.m. (Central Mexico time). The next day, he will have his daily morning press conference in Guadalupe, Zacatecas, at 07:00 hrs.

Zacatecas’ Juanicipio mine to begin operations in October