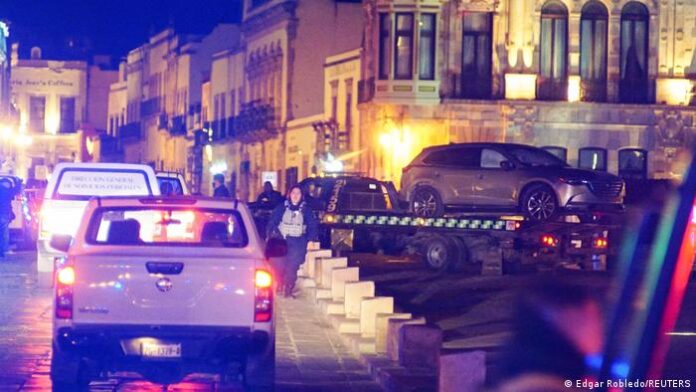 As posted by The Mexico Daily Post on Thursday, January 6th, ten dead bodies were left outside the Zacatecas government palace.

The state is gripped by a turf war between the notorious Sinaloa and Jalisco New Generation cartels, with an upsurge of violence in recent years. Both syndicates are believed to be fighting for control of drug smuggling routes to the United States.

How were the bodies found?

According to the federal Public Safety Department, a man drove the truck into the plaza, then left the car and walked away down an alley. State officials said the car had been driven suspiciously in the area.

Zacatecas state governor David Monreal said the find had been made early in the morning and that the bodies showed signs of having been beaten.

“They came to leave them here in front of the palace,” he said in a video, referring to his offices in a centuries-old building in the state capital, also called Zacatecas.

The Plaza de Armas square was lit up with a Christmas tree and holiday decorations at the time.

Promise of end to violence

The governor later tweeted that the alleged perpetrators had been arrested, without identifying them.

He said security had proved a major challenge in Zacatecas and he promised to deal with the violence.

“Bit by bit we will recover our peace. What we received was a cursed inheritance,” he said.

According to the federal Public Safety Department, a man drove the truck into the plaza, then left the car and walked away down an alley.

Zacatecas has become one of the most violent regions of the country as rival gangs vie for control. The state registered 1,050 murders in 2021, about 260 more than in 2020.

Mexican President Andres Manuel Lopez Obrador has struggled to significantly reduce homicides in Mexico. The first 11 months of 2021 saw 31,615 killings recorded — a decline of just 3.6% from the 32,814 in 2020.