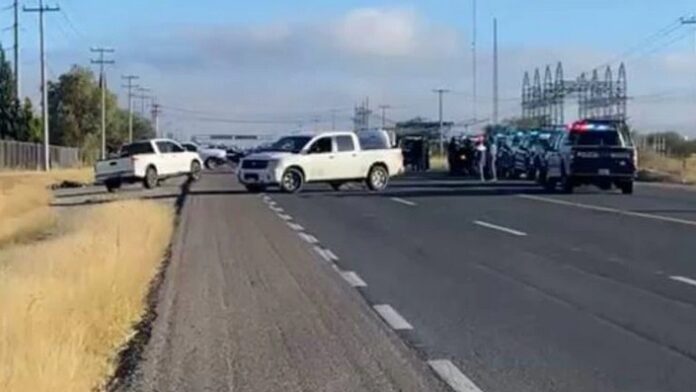 Sunday, November 14, on federal highway 25, at the height of the Crisóstomos community, in Asientos, Aguascalientes, the bodies of three men in Zacatecas police uniforms were found at 6:30 am.

According to local media, the bodies could be that of the director of the Loreto Municipal Police and the two officers who were kidnapped by armed individuals at dawn on Monday, November 8. However, the Zacatecas Prosecutor’s Office confirmed to Infobae México that because the Aguascalientes authorities continue to carry out the expert actions, they still do not have information to confirm the identity of the bodies.

Motorists who were circulating on the federal highway discovered the bodies and made the report to the 911 Emergency System. Elements of the Aguascalientes Public Security Secretariat and municipal police officers.

Authorities have not confirmed whether the officers were killed in that place or elsewhere before they were thrown on the asphalt tape, to one side of the passing vehicles. The authorities who arrived as the first responders requested the presence of the personnel of the Expert Services, who carried out the gathering of evidence and the transfer of the corpses to the Forensic Medical Service, where they are working to clarify the facts.

Last week, the director of Public Security of Loreto , Zacatecas , was illegally deprived of liberty along with two policemen.

According to reports, the attackers broke into the home of the police command , but had previously stolen the vehicle assigned to the municipal president, Gustavo Aguilar Andrade . After kidnapping two security elements, the armed subjects went to the commander’s house, whom they forcibly removed , kidnapped and so far it is unknown if their bodies correspond to those found in Aguascalientes this Sunday morning.

They have not highlighted further details on the armed group that kidnapped the policemen, but it is known that the zacatecana region is disputed between the Sinaloa cartel against the forces of the Cartel Jalisco New Generation (CJNG).

On the afternoon of November 10, in the neighboring municipality of Villa García, state agents were attacked with bullets in a skirmish that left seven alleged hitmen arrested .

The attack occurred in the Villa García district. This demarcation is located half an hour southwest of Zacatecas where the security personnel were kidnapped.

The State Secretary of Security reported that the agents were carrying out surveillance tasks in the vicinity of the municipality when armed subjects attacked them with bullets with high-powered weapons.

Other agents came to support but this resulted in another attack by a second armed group . In these actions, a uniformed man was injured , but his state of health was reported as stable . While a vehicle of the alleged hitmen caught fire and another was insured.

After several minutes in the exchange of fire, the police controlled the situation and seized tactical equipment, long firearms, a grenade launcher attachment and 40 mm grenades . The arsenal was under the custody of local ministerial authorities.

“At the moment the situation has been controlled and the mobilization of personnel from the Secretariat of National Defense (SEDENA), National Guard (GN) and the Attorney General’s Office of the State (FGJE) is recorded, who carry out tours in that region of the state ”, highlighted the State Board of Peacebuilding and Security.