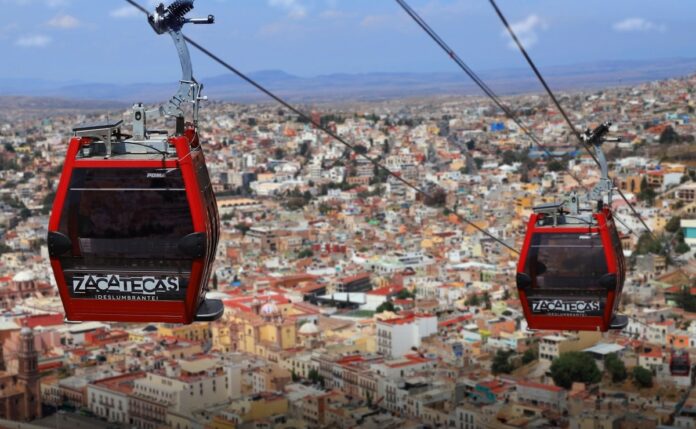 In two of the most emblematic hills of Zacatecas, gondolas stand 85 meters above sea level that allows tourists to get panoramic views of the well-known “Civilizadora del Norte”. The Zacatecas cable car is a historical gem that everyone should know once in their life. Nine minutes from the historic center of the city of Zacatecas is the first cable car station in Mexico. It takes you to Cerro de la Bufa, overlooking the rocky hills and old houses where it seems that time has not passed.

The city of Zacatecas conquers travelers with its imposing landscapes colored with mahogany earth and the bluest skies that can be seen in all of Mexico. This old mining city claims to have been the first state to have a cable car. He still continues traveling from the Cerro del Grillo to the Cerro de la Bufa .

The Zacatecas cable car began to be planned in 1977 thanks to the idea of ​​Ana María Rojas de Pamanes, the wife of the state governor at the time. The construction was done in a record time of two years. The project was inaugurated on October 3, 1979, and former President José López Portillo cut the opening ribbon.

This cable car, in addition to being the first to be built in Mexico, was also the first designed for tourists. The objective was that people who traveled in the cable car from Cerro del Grillo to Cerro de la Bufa or vice versa, fell in love with Zacatecas because from there you could see part of the historic center: the Plaza de Armas, the Temple of Fátima and others. more places.

However, in 2016 after almost 40 years of operation, the cable car stopped for two years to renovate cabins and add a glass floor in order to improve the experience in the heights.

Observe Zacatecas from the heights If you go to the city of Zacatecas, you cannot stop getting on the cable car. It takes you   85 meters high, from where, according to locals, you can admire a blue sky that is not in any other part of the state.

This cable car has two starting points: at the Cerro del Grillo and at the northern end of the Cerro de La Bufa. In one of the seven red cabins, suitable for eight passengers, you can enjoy a ride of approximately 642 meters in length.

For photographers or fans of panoramic shots, a cable car is a great option because you will have a privileged view of some of the most famous sites in Zacatecas, such as the historic center that was declared a World Heritage Site by UNESCO and its beautiful details in pink quarry.

See an art gallery from above

From the cable car, you can see an open-air art gallery. It is an initiative of the State Government, together with the Zacatecas Tourism and Cultural Cluster, to give another meaning to the roofs of the houses, since many of these have been intervened to beautify them with huge colorful murals.

One of the artistic pieces that you can find is the mural Vision of a mystical world by the famous Wixárika artist Santos de la Torre, who sought to capture mystical elements of the Huichols. So do not forget to be very attentive and look at the ceilings so as not to miss anything. In addition to the cable car, you can tour “La civilizadora del norte” through its mines. Just below the Cerro del Grillo, is La Mina del Edén, one of the most famous in the city for its economic importance in the 18th century.

In this mine there is a museum of stones and minerals. There are large-scale dioramas of some of the most important miners. Before starting your ride on the Cable Car you can start here.

After your cable car ride, glide down a zip line, if you are looking for more extreme activity. At the top of the Bufa hill is the 840 Zipline, one of the longest in Mexico. There you will travel at full speed a distance of 840 meters – the reason for its name – in length, at a maximum height of 85 meters.

The views from the zip line are amazing because you can see the mines, the Zacatecan hills, and the city in all its expression. With a little wind, the adrenaline rises, but the experience is undoubtedly unique and safe. The schedule is from 10 in the morning until 6:30 in the afternoon and has an approximate cost of 200 pesos per person.

To guarantee your safety, Zipline 840 has specialized protective equipment and is operated by qualified and certified personnel in adventure tourism. Cables, harnesses and more equipment are approved by Civil Protection. After the zip line, you can go to the San Bernabé mine, to take an excursion aboard a 4×4 through the steep terrain of the hill. It lasts about two hours on suddenly steep dirt roads and speeding ponds.

To do this last ATV circuit, they provide you with protective equipment: helmet, vest, non-slip footwear and other accessories provided by the mine equipment. To do this activity contact Moto Tours at 492 117 15 30.

Before you travel, find out about the restrictions of each destination. You must consider that the pandemic is still present and that the protocols established by the authorities may change from one moment to the next.