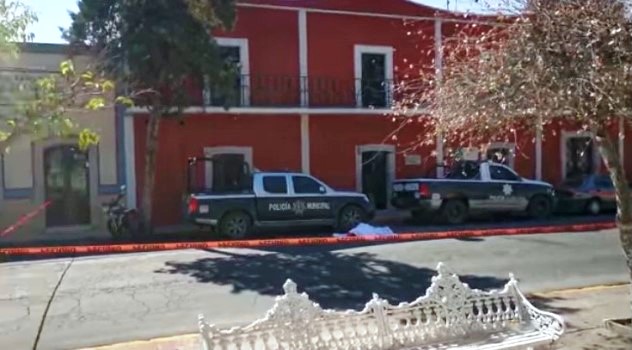 Zacatecas, Zacatecas (April 8, 2021).- Armed men part of an unidentified criminal group, opened fire against the facade of the municipal presidency of Tepetongo, Zacatecas this Thursday, April 8th, at broad daylight, unleashing an exchange of shots with police officers, with a balance of one gunman killed, right at doors of the Public Security office.

The attack occurred around 9:30 a.m., and caused the deployment of dozens of state police and members of the National Guard throughout the region that borders Huejúcar, Jalisco to the south and Jerez de García Salinas, Zacatecas, to the north.

Tepetongo, whose population barely exceeds 7,350 inhabitants according to Inegi, is located 90 kilometers southwest of the capital of Zacatecas. This small town, through which federal highway number 23 crosses, has been under siege for more than two months by violence and insecurity caused by gunmen fighting for territory, with frequent clashes day and night.

Just last Friday, April 2, for more than three hours, dozens of hitmen – alleged members of the Sinaloa Cartel and the Jalisco Nueva Generación Cartel – fought with heavy caliber weapons on the streets of this town, where at least ten gunmen died. whose corpses -according to the testimonies of the inhabitants of this place- were taken by their fellow criminals, loading them into the trays of the pick-up trucks in which they traveled.

According to the Secretary of Public Security of Zacatecas, four houses were found shot and burned, as well as four motor vehicles and five fully burned motorcycles, in different streets of Tepetongo. Likewise, hundreds of casings of heavy caliber weapons, such as Ak47 better known in Mexico as cuerno de chivo, “goat horns” and Ar-15 rifles, were scattered throughout the streets all over town.

This Thursday, just at noon, Tepetongo looks deserted, without people. Neither vehicles nor inhabitants are seen on the streets. Just a car or two passing on federal highway 23, which connects the cities of Guadalajara and Fresnillo.

An elderly woman from Tepetongo spoke about the situation that prevails in this place:

“We have many consecutive days, day and night, with shootings, trucks have been stolen, houses and cars have been set on fire, the town is chaos, and everything is closed right now, everything, you see, all the stores, the businesses.”

Although three men -one young and two elderly-, also came out of their houses to see what happened in the main square of Tepetongo, only women dare to speak and denounce what is happening here.

Another housewife says: “Many people are leaving the town, this is very sad” No authority has contacted us to tell us about the Covid-19 vaccine, no one has come here, they have not come to vaccinate us, not here. Nothing”

A woman consults another who walks fearfully through the area: Are you not going to open the store anymore? No, she answers, I think that for about ten days I will not open, this is very dangerous. Now, every so often you hear noises, shots, and we ask for help and nobody says anything. Here in our church Saint John the Baptist is venerated, and they also closed it, they have no longer called rosaries… we are here very much left behind by the government ”.

A citizen of Tepetongo spoke about the PRI mayor Sinforiano Armenta García: “Municipal President? No, we don’t have a municipal president here. We know that he is never here, that he lives somewhere else, someone who is not here is not good for us. Where is he when we need him? He does not exist ”.

In fact, just on Friday, December 4, 2020, an armed commando deprived Armando Cuevas Rocha, director of the Tepetongo municipal police, of his freedom, along with two police officers from that corporation. That same night, the remaining seven municipal police officers of the place resigned, and the State Preventive Police took over the tasks of public security in this town.

Three days after the event, the two municipal police officers were found executed, on the side of the highway to Guadalajara. Subsequently, on December 11, the director of the corporation, Armando Cuevas Rocha, with a message of organized crime, was found lifeless, beheaded and mutilated, on a road that crosses the community of Juancho Rey.

On the other hand, in other acts of violence that occurred during the last hours in different parts of the state, five more people died violently: 2 in Fresnillo, 1 in Calera de Víctor Rosales, 1 in Guadalupe, and 1 in Zacatecas.