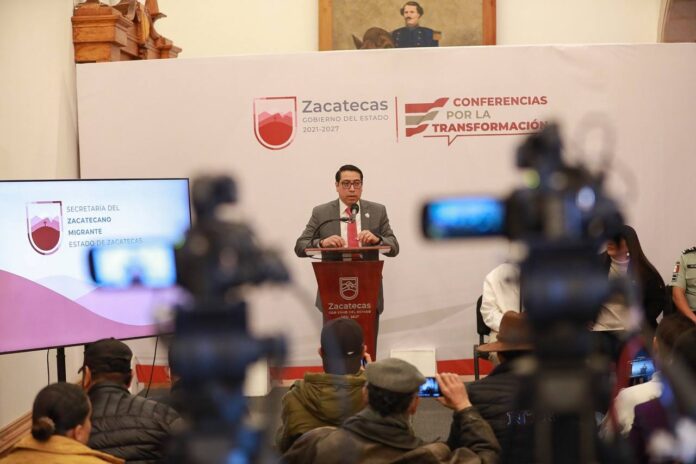 Through Operation Winter 2022 of the Héroes Paisanos Program, the number of observers is increased, more elements of the National Guard on roads and aerial reconnaissance

Zacatecas, Zac., December 21, 2022.- The Governments of Mexico and Zacatecas, through the National Guard, the National Institute of Migration (INM) and the Secretariat of the Zacatecano Migrant (Sezami) reinforce the surveillance on highways of the state, as well as the attention and accompaniment of the fellow Mexicans and visitors who travel in this holiday season.

This was announced at the Conference for Transformation by the Secretary General of the Government, Gabriela Pinedo Morales; the Secretary of the Zacatecano Migrant, Iván Reyes Millán; Captain Dorilyan Pavel Orozco Montejo, first coordinating deputy inspector of the Security Company for Communication Routes of the National Guard in Zacatecas and Carolina Gálvez de Ávila of the (INM) in the state.

Gabriela Pinedo specified that, due to the needs of the season and to make the traffic of visitors more fluid, as of this day, the National Guard will provide 140 more elements, which are added to the 310 that are already in Zacatecas for highway surveillance, product of the meeting between Governor David Monreal and General Luis Rodríguez Bucio, commander of the National Guard.

In addition to air patrols, in charge of the Secretary of Public Security with the support of the National Guard; The INM will establish more camps so that they function not only as rest areas but also as care areas for services, procedures and other requirements of the fellow Mexicans or visitors.

The accompaniment of the migrant community that returns to their communities of origin or transits the highways is part of the federal Héroes Paisanos program, in which the Government of Zacatecas collaborates because Governor David Monreal has instructed to increase the actions so that the passage through the state of the countrymen is calmer and safer.

Iván Reyes Millán reported that, prior to the start of the Héroes Paisanos program, the Secretariat of the Zacatecano Migrant worked in coordination with security and surveillance units at the national, state and municipal levels to reinforce the presence at the points of entry.

In addition, a dissemination campaign was implemented through the different digital platforms and the portal https://sezami.zacatecas.gob.mx/servicios-paisano/ was enabled to inform the migrant community of the services, documents, recommendations and procedures that must be taken into account for your trip.

For the second year in a row, ground and air accompaniment was provided to the caravan of travelers that left Laredo, Texas, on Saturday, December 17.

He explained that as of this date, the presence of aerial reconnaissance on highways such as 54 and the Carousel operation of the National Guard is reinforced, through which travelers in transit are accompanied in the journey, from time to time, especially, in the section Concepción del Oro-Morelos.

Same operation has been scheduled for the return on January 6, 7 and 8, for which the concentration of the travelers will be in the Regional Security units, where the Government of Zacatecas, the Secretariat will coordinate efforts of the National Defense, the Green Angels and the National Guard, among others.

Carolina Gálvez de Ávila of the  Héroes Paisanos Program of the (INM) in Zacatecas, reported that in the modules that are installed during the program at different highway entrance points to Zacatecas and at the Leobardo C. Ruiz International Airport, among other actions, the observers detect the needs that they have during their journey and receive the suggestions, to identify the points that must be reinforced.

According to the information obtained from November 29 to December 10, the request of the Paisanos is mainly for greater surveillance on Highway 54 where, in coordination with the National Guard, the presence of elements was reinforced.

She added that they will assign 25 additional observers to the 18 they had at the beginning of the operation.

Finally, the authorities urged the fellow countrymen to report if they are victims of any crime, as well as misconduct by public servants at any level of government, as well as to file complaints formally, on the different platforms that already exist.

If you’re looking for an experience away from the crowds, head to historic Zacatecas (VIDEO)

Video: hitmen from the CJNG and the Sinaloa Cartel prepare for confrontation for control of the Zacatecas