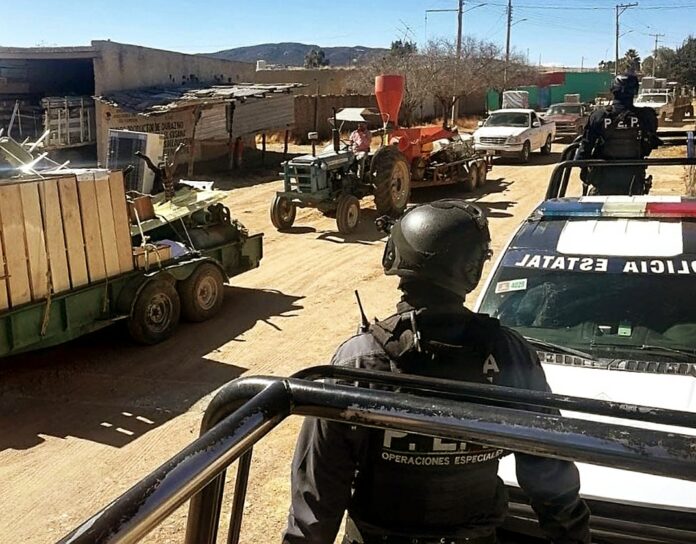 Officials from Zacatecas ‘flee’ to Aguascalientes

According to the secretary of the Government of Jerez, there are 18 displaced communities, in each one live an average of between 500 and 800 families, which on average yields 10,000 people who fled.

The war between the Jalisco Nueva Generación Cartel and the Sinaloa Cartel has caused the displacement of at least 10,000 people in Jerez, Zacatecas alone, the municipal authorities acknowledge.

Twenty ranches and towns in Jerez became ghost towns from 2021 to date, where the law of the authorities does not rule, but that of the drug trafficker.

According to the Secretary of the Government of Jerez, Marco Antonio Vargas, there are 18 displaced communities, in each one live an average of between 500 and 800 families, which on average yields 10,000 people who fled“There were 18 communities that were affected, they are communities that are in the mountain area, adjacent to two municipalities with an insecurity problem, which are Fresnillo and Valparaíso. Some of them, such as the Ermita de los Correa, La Ermita de Los Membrillo, Colonia Hidalgo and Briseño remain calmer,” said Marco Antonio Vargas.

On Saturday, February 19, Palmas Altas was added to the list of abandoned ranches.

At least 100 families were helped by state, municipal, and federal authorities to remove their belongings after armed civilians threatened to kill the residents if they did not leave their homes.

The residents took out beds, refrigerators, stoves, some animals, and clothing in vans. The convoy of vehicles with the families and belongings was guarded by police and military.

Most of the displaced took refuge in Jerez and Zacatecas capital, in the homes of friends or relatives, although a significant number requested political asylum in the United States.

Palmas Altas is located 33 kilometers away from the municipal seat of Jerez. During the road that leads to said town, hundreds of shell casings from large-caliber weapons can be seen throughout the highway, which remained as witnesses to the skirmishes between criminal groups from Jalisco and Sinaloa.

Upon arrival, the first thing you see is a white Ram truck with bullet holes in the windshield, the vehicle was abandoned by civilians in one of the many skirmishes.

A few meters from the truck are two houses, on whose facades several pints can be seen with threatening messages between the CJNG and the Sinaloa Cartel, and their armed wing Las Flechas, from El Mayo Zambada.“It is an issue that does not allow us to be calm yet, our objective will be, as happened in La Ermita de los Corre, people can return to their homes and communities. We require the support of the Mexican Army, the National Guard and have conditions so that we have two more installations of federal forces in that region of the municipality”, narrated the secretary of the Government of Jerez.

A man whose identity will not be revealed for security reasons, recalled with a broken voice, that a year ago his father died of sadness after the disappearance of his brother in Palmas Altas at the hands of armed civilians who took him and three other people.

He narrated that the criminals picked up people at random, most of them did not return, but those who were lucky enough to return to their families arrived with mutilated ears.

The man who remembers the disappearance of his brother was the last villager to leave Palmas Altas. He pointed out that 15 days ago armed men broke into the community, he said that he hid in a neighbor’s house because he feared that they would pick him up, which fortunately did not happen.

Today he tries to rebuild his life in Jerez, unfortunately, he has not been able to find a job to feed his family, because the only thing he knows how to do is work the fields.

Few people dare to circulate through the rancherías of Jerez, those who do live in their own flesh the terror of encountering criminals.” It’s already scaring me a lot. It’s very scary, I think we’re going to have to go back another way, I don’t know,” said Melisa Álvarez, a resident of Zacatecas.

On Tuesday, February 22, vehicles of the Mexican Army known as SandCat, arrived in Zacatecas, to redouble security operations that seek to retake control of the ranches, towns, and villages taken over by drug traffickers, something similar to what Michoacán is experiencing, where The military forces expelled the criminal groups from Tierra Caliente.

Government officials in Zacatecas changed their residence to Aguascalientes due to insecurity issues, revealed the Secretary of Government of this entity, Juan Manuel Flores Femat, who for security reasons did not reveal their identity.

But it is not only officials who have left Zacatecan lands, businessmen have also arrived in Aguascalientes. “Well, we have been aware of businessmen who have been migrating to

Aguascalientes for a long time, families and, as I say, officials, this is an orderly migration,” he said.

Flores Femat indicated that, although this is not new, it is unfortunate that people have to change their place of residence due to security issues, so he hopes that the situation in Zacatecas can be resolved soon so that all its citizens can live in peace.“We are saddened and concerned that we have to reach those points where the security measures are the exodus and not being able to combat insecurity in those lands,” he added, however, he clarified that they are welcome to Aguascalientes.

Faced with the idea that people not welcome to Aguascalientes could also reach the entity, the official indicated that there is no such concern since they are fully sure that the people who have arrived in the region are citizens who have an honest way to live.

Finally, Flores Femat specified that these people who have migrated have not asked for support from the government of the state of Aguascalientes.

The Zacatecas government is facing one of its worst killing sprees, a product of clashes between organized crime gangs.

Zacatecas’ Juanicipio mine to begin operations in October

American woman dies in Guadalajara, after being shot in Zacatecas