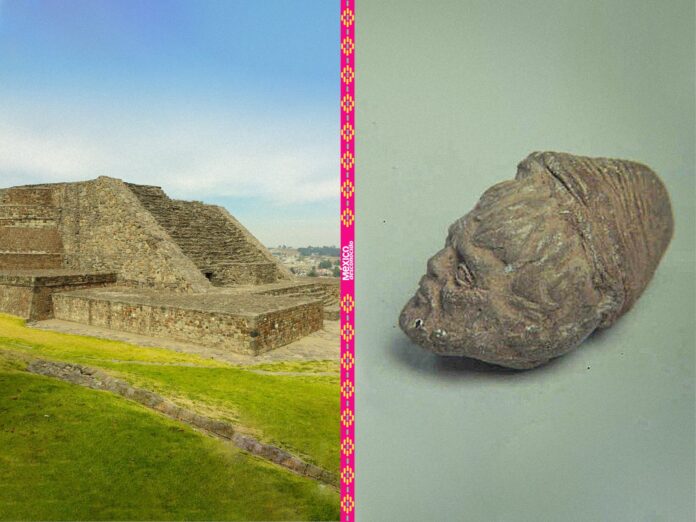 The discovery of a Roman terracotta head found in a pre-Hispanic burial called into question the entire history of Mexico and America.

In 1933, a group of excavators led by the legendary archaeologist from Chalchihuites, Zacatecas, José García Payón, located within a Pre-Hispanic burial of Tecaxic-Calixtlahuaca, the sculpted terracotta head of a man with a stern face, a flat forehead and a bearded face: it was about the representation of a Roman.

It appeared together with all funerary equipment composed of ceramic fragments, pieces of gold, bone and rock crystal, covered under three intact layers of the soil of a pyramidal structure.

The finding, for those who have not realized it, hits a few forceful blows to the columns that support the version that Columbus would have been the first to reach the new world and supports the hypothesis of transoceanic contact between the new and the old continent hundreds of years before what we have been told.

This is because, to begin with, José García Payón dated all the pieces found in the Tecaxic-Calixtlahuaca burial, an archaeological site located in what is now Toluca, between 1476 and 1510 AD, and Hernán Cortés and his men arrived into Veracruz in 1519, although it was until 1521 when they achieved the subjugation of the Aztecs.

But the mysteries do not end there. For many years the enigma of “the head of Tecaxic-Calixtlahuaca “, as the piece in question is known, was forgotten until 1961 when the Austrian anthropologist Robert Heine-Geldern examined it and determined that the head would have been sculpted in 200 BC

And as is frequent in archeology, the more evidence, facts, and larger answers the questions become: in 1990 the archaeologist Bernard Andreae, then director of the German Archaeological Institute of Rome, said about the terracotta figure, found by José García Payón, that ultimately “is Roman without a doubt ..”

Then he added: “the stylistic test tells us, more precisely, that it is a Roman work. It presents in the haircut and the shape of the beard the typical features of the Severian emperors (193-235 AD) exactly the fashion of the time ”.

This opinion was cited by researchers Romero Hristov, currently professor of Anthropology at the University of New Mexico, and Santiago Genovés, for the publication of the study entitled Mesoamerican Evidence of pre-Columbian transoceanic contacts, in which they referred to other discoveries of Roman pieces in other latitudes of America like the coins found in 1963 during the construction of a bridge over the Ohio River from Louisville.

In the absence of clear answers about the origin of “the head of Tecaxic-Calixtlahuaca”, archaeologists have thrown various hypotheses such as that the head was intentionally placed by one of García Payón’s collaborators to play a joke on him, taking advantage of the fact that he did not take exhaustive notes of their excavations.

Another theory indicates that the piece was introduced for burial almost in the first months of the Conquest process. While the third assumption indicates that the head actually arrived at some point in the pre-Columbian period through Asia. The investigation sleeps there waiting for someone to open it again … the coin is still in the air.

The Mexican origin of the American cowboy

When the Yucatan Peninsula separated from Mexico

US ancestors formed communities in Coahuila municipalities during the 19th Century